At Marineland, innovation powers everything we do.

As manufacturers and fishkeepers ourselves, we take great pride in making quality products. We also enjoy making the hobby fun, educational, and easier for our fellow fishkeepers. That's why we've assembled the best information to help ensure you're successful, and your fish are healthy and happy. 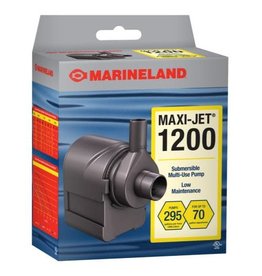 Energy-efficient Maxi-Jet® Pumps are very durable. With a sealed casing and superior internal design, it ensures that they won't overheat when ran dry, unlike most other pumps. They feature 3-suction cup mounting to ensure that the
Add to cart
Marineland Maxi-Jet 1200 Water Pump 295 GPH
$36.82
Please accept cookies to help us improve this website Is this OK? Yes No More on cookies »